Here is a book that I found an excellent source of inspiration on many fronts: 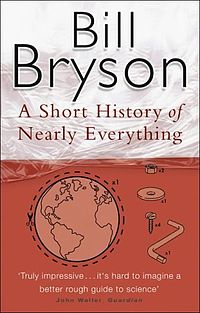 “A short history of nearly everything”by Bill Bryson
The book describes general sciences such as chemistry, paleontology,astronomy, and particle physics. In it, the author explores the time between the Big Bang to the discovery of quantum mechanics, via evolution and geology. Bryson tells the story of science through the stories of the people who made the discoveries, such as Edwin Hubble, Isaac Newton, and Albert Einstein.
Bill Bryson wrote this book because he was dissatisfied with his scientific knowledge. He writes that “science was a distant, unexplained subject at school”. Textbooks and teachers alike did not ignite the passion for knowledge in him, mainly because they never delved in the whys, hows, and whens.
I spent many years having the same questions that the author had. We know for example that earth is round but little is offered from science books on how we discover it. The natural curiosity process should be based not on simple facts but on the context of each discovery. It needs background information otherwise it is not very effective.
As Bryson put it: “It was as if [the textbook writer] wanted to keep the good stuff secret by making all of it soberly unfathomable.”
Bryson tries to put science in context by going step-by-step throughout the discovery process and not by simple giving facts. And it does so through the personal stories of the men behind the discoveries. This humanization of science works in a very effective way. Bryson builds on the curiosity process and provides information in a context that just makes sense.
If you are even distantly interested in science, do yourself a favor. Read it.